Given the depth and speed of the ongoing global technological revolution, it is not surprising that “smart” solutions are multiplying rapidly in the field of frontline conservation.

In the northern Pacific, an advanced technology most often associated with the gritty business of war or the shadowy world of intelligence is being used to seek out a Hawaiian plant species that was until recently thought to be extinct in the wild.

Researchers from the National Tropical Botanical Garden (NTBG) on Kauai have employed unmanned aerial vehicles (UAVs) in their search for individuals of the “lost” species, Wood’s hau kuahiwi (Hibiscadelphus woodii; family Malvaceae). Having only been discovered in 1991, this exotic relative of the hibiscus, with its bright, curly gift-wrap-ribbon petals, had last been seen in the wild in 2011, dead, and was therefore considered extinct by the IUCN.

It inhabits the sheer cliff faces of a remote part of Kauai’s Kalalau Valley. A recognised biodiversity hotspot in the Hawaiian Islands, most sections of the cliffs are inaccessible to humans, but more importantly, they are also steep enough to discourage even the most determined of marauding goats, with their insatiable appetites for all manner of vegetation. Nonetheless, this is still a perilous location for H. woodii, which faces threats from invasive plants and rockslides – such as in the late 1990s which led to the eventual demise of the only known colony of the hau kuahiwi.

With the support of a $6,000 grant from the Fund, NTBG botanists employed a drone to survey the cliffs, discovering three lonely individuals of the lost H. woodii and giving rise to hopes that others have survived in similarly inaccessible locations; indeed, such surveys may yet reveal the presence of other species that are thought to be extinct in the wild. 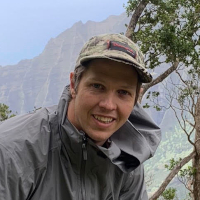