Clearing a path for flight

Save the habitat of Tahiti Monarch from the invasive Miconia calvescens

The survival of the Tahiti Monarch, a rare flycatcher whose tiny population faces various threats including black rats, red fire ants and other bird species are now facing another danger in the form of an invasive plant.

The Velvet tree (Miconias calvescens) is one of the most damaging intruders of tropical rain forests because of its potential to invade indigenous ecosystems and in Tahiti it is described as the “green cancer.” It’s aggressive invasion is partly due to its copious reproduction where one mature tree can flower up to three times a year bearing hundreds of fruits with one fruit producing hundreds of seeds. These invasives overtake the native vegetation upon which the Tahiti monarchs rely.

In order to protect the modest monarchs, whose numbers dropped to only 12 in 1998 but thanks to conservation efforts are now close to a hundred, scientists hatched a plan using rock climbers to remove the invasive plant life from cliff sides to open up new territories for the future of this unique bird species.

Since 2013 Dr. Blanvillain with the help of volunteers had been working on the base of the Monarch Valley unable to reach important patches in the cliff sides. With a grant of $8,000 from the MBZ fund, Dr. Caroline Blanvillain hired rope specialists to remove the Miconia deep in the Papehue Valley slopes, which they succeeded in achieving.

During the first half of the 2021-2022 breeding season at least 125 adults and 55 pairs were monitored. ‘16 pairs have produced 17 fledglings, from which 16 survived. Nine nests are still active. The population has increased by 19% in one year.’

The grants also leveraged their success to initiate two more projects with other funders and the local government after discovering four critically endangered plant species and starting a new sandal wood project with local farmers.

Despite Covid-19, volunteers devoted ‘230 days on habitat restoration, from invasive plant removal to plantation. 161 plants have been planted, including 59 classified as CR or EN.’ 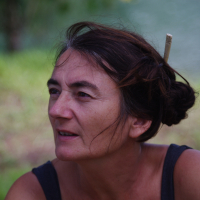