The Race to Save Mauritius’ Snails

Mauritius, the last known home of the now extinct Dodo bird, is in the Indian Ocean off the east coast of Madagascar. Born from volcanic activity, it is surrounded by sandy white beaches and lagoons protected by coral reefs. Its relative isolation means it is home to some of the world’s rarest plants and animals.

The settling of humans, which ultimately led to the demise of the Dodo bird, is still the main threat to species here; however, since the 1980s, conservation has been a high priority with several areas now declared national parks and reserves for endangered species, including indigenous snails.

There are a total of 125 known indigenous snail species in Mauritious: 81 endemics, 32 Mascarene endemics and 12 native species. Since the arrival of humans, 44% of endemic snails have gone extinct.

Snails are an important part of the ecosystem with many feeding on living and dead plant material, they help breakdown, decay, and recycle nutrients. They are also prey to a range of animals and an important component in many food chains.

On a quest, supported with a grant of nearly $6,000, Owen Smith together with Mauritius-based organization, Valle de L’Est, has created a captive breeding site for indigenous snails at La Vanille Nature Park.

Snails demand special care and expertise; under the guidance of Mr. Smith the snails were reared outdoors and fed year-round. In addition, building predator–proof fences, daily monitoring with bi-weekly cleaning of enclosures and extra care taken for their young when mortality is at the highest, they hoped to raise 250 adults.

By the end of March 2021, Owen’s team had bred more than 300 Pachystyla bicolor from only four adult snails.

The released population is doing well and the team will continue captive breeding to support release at other suitable sites, and they now believe the species has been saved from extinction. 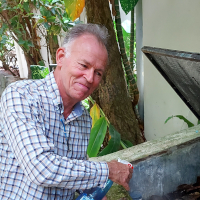