The Fall of The Mighty Mahseer

The “Tiger of the Water” is one of the nicknames given to the Wayanad Mahseer (Neolissochilus wynaadensis), a tough and agile freshwater fish found in the upland streams and rivers of India’s Western Ghats, primarily in the Wayanad plateau, at an altitude range between 400-1,100 meters.

Unfortunately, it doesn’t enjoy the same global concern for its survival as its land-based apex predator counterpart, the Endangered tiger (Panthera tigris) although it is listed as Critically Endangered – it is even more threatened.

An endemic cyprinid fish, it is part of the carp family and can grow to lengths of nearly three meters and weigh up to 50 kg. It is also an important game fish in parts of south and Southeast Asia and known to be one of the ‘most hardest fighting fish.’ It can also be found in the aquarium trade but it is unfortunately very poorly known and documented.

Preservation of this particular species is crucial as it is a fish that is near the top of the food web and performs a similar ecological function to tigers in a forest (hence the nickname!).

Anglers used to traverse the continent in the mere hope of seeing one, and English anglers likened it to European Salmon. This large freshwater fish was very popular during the colonial era, but it has since suffered a heavy decline losing up to 80% of its population in the last decade. The exact numbers are unknown, but there are certain areas, such as in the Kodagu District of Karnataka State, where the fish is still found in numbers.

Project leader VK Anoop from Kerala University of Fisheries and Ocean Studies has pinpointed various threats to this species, such as overexploitation, pollution, the aquarium trade, as well as invasive species. Habitat destruction and the construction of dams are also contributing factors.

With a grant of $23,900 VK Anoop and his team planted 2,500 native tree species in the species predicted breeding grounds. This improves the river’s health, prevents soil erosion and provides improved riparian habitation. There was also a push to increase local expertise and manpower for conservation while also studying traditional knowledge to manage fisheries. The MBZ funding also provided a crucial cushion for employing local tribes living in the area during the COVID pandemic. 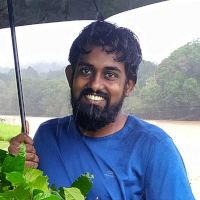