Return of the legend

The Yangtze Giant Softshell Turtle (Rafetus swinhoei) or Swinhoe’s Softshell Turtle is a species that holds special cultural significance in Vietnam, where it is known as the Hoan Kiem (“returned sword”) turtle. It is said that when the 15th century King Le Loi defeated the Ming Dynasty army, he gave the sword to the turtle god Kim Qui.

It typically weighs between 150-220 kg, can be more than 1.75 m long and can live for more than 100 years. It has a long neck, mottled nose and googly eyes, with a pig-like nose that gives it a “Star Wars alien” uniqueness.

As well as being redlisted as Critically Endangered the turtle is also ranked at number 20 on the Zoological Society of London’s EDGE list of reptiles, and has a current known population of just three. Scientists released genetic results confirming the female turtle captured in October 2020 in the Dong Mo dam, and we know of at least another male and a female at Suzhou Zoo in China.

In 2019, the Vietnamese government released a turtle conservation action plan, announcing an additional plan to protect members of the species found anywhere within the city’s jurisdiction.

Utilising a grant of $25,000, project leader Long Nguyen has identified a handful of additional places where the turtle might still be living. The Wildlife Conservation Society (WCS) conducted eDNA surveys over 18 days, collecting 297 samples from 129 priority areas where the turtle was suspected to be. The team is waiting on the lab results of six weak-positive samples collected.

The eDNA technology developed hasn’t turned out to be a silver bullet due to the potential for many false negatives and the difficulty in filtering the water due to its turbidity has also been a hindrance. The restrictions presented by Covid-19 have also proved difficult.

The grant also leverage an additional funding of $5,000 from a private donor which helped cover WCS staff time and it is hoped that future funding can restore this legendary species to its former glory. 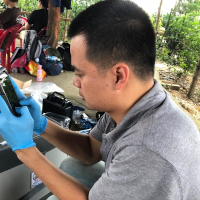