Fanning The Flames of Conservation in Bosnia & Herzegovina

The Fan mussel is the largest bivalve mollusc in the Mediterranean and it has had periods where it has flourished, particularly just after it was added to the IUCN Red List of Endangered Species in 1992. It used to be prevalent throughout the Mediterranean, but the first massive mortality of this particular species occurred in 2016 in Spain (Alicante), when 80-100% of the individuals were wiped out. The phenomenon, caused by the Haplosporidium pinnae pathogen, has continued to spread around the Mediterranean Coast in the intervening period and only a few isolated populations still survive.

There is a lack of data on Fan mussels in Bosnia and Herzegovina (BiH), primarily because the country doesn’t have an institute or faculty of marine science and is the only country in the region without a Marine Protected Area (MPA). On the positive side, much of the area where the species is found is isolated from industrial fisheries and is also surrounded by the MPA of Croatia.

Adla Kahric of the Centre for Marine and Freshwater Biology (Sharklab Adria) with a grant of $ 5,000 from the MBZ Species Conservation Fund is working to secure the future of the species.

The project will provide very detailed data on Fan mussel distribution in BiH. The grant will also facilitate meetings with government and local stakeholders and inform and educate more than 1,000 people through presentations, workshops and educational events. It is hoped that this will be the first step in the preservation of the Fan mussel in BiH. 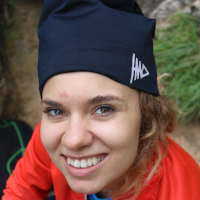