Tarzan, chameleon of the jungle

Just over a decade ago, a rare, small, colour-changing lizard was discovered in a tiny-forested area in central eastern Madagascar. Endemic to the island, Calumma tarzan known as the Tarzan chameleon was named after the nearest village Tarzanville (now Ambodimeloka). It was also given its “heroic” name to stoke awareness and promote protection of this Critically Endangered species.

This jungle chameleon has a flat, spade-like snout and is typically yellow or green in colour. It emits interesting stripe patterns across its body when stressed.

Although Madagascar is home to ‘40% of the world’s known chameleon species,’ this 13 cm long lizard’s habitat only occupies very small fragments of isolated forests that is restricted to a range of less than 10 km.

Madagascar’s forest cover is shrinking. This threatens the fragile habitat of the Tarzan chameleon and more research is needed to understand population numbers and distribution throughout out the area.

Supported by a grant of $8,000 Madagasikara Voakajy, a Madagascar-based biodiversity organisation working to ‘conserve endemic vertebrates and their habitats,’ accessed the chameleon’s habitat, surveyed their presence, estimated their numbers, and studied their interaction with humans.

Unfortunately, the team found that many of these forest fragments were, like others in Madagascar, affected by bush fires and logging, which confirmed that the population of the Calumma tarzan continues to be ‘severely fragmented’ and best found in undisturbed forests.

Four other species of chameleons were also encountered during the survey and this grant also helped the team secure an EDGE Fellowship from the Zoological Society of London. 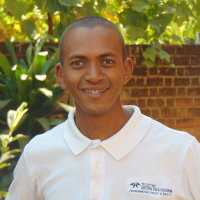